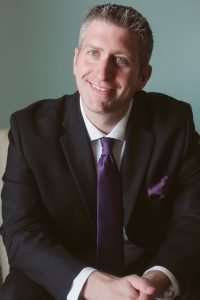 Ryan is a graduate of Marywood University in Scranton, PA.  In December of 2004, Ryan successfully passed the Registration Exam for Dietitians on the first attempt through the Commission on Dietetic Registration.  His undergraduate degree in nutrition is from Marywood University, along with a masters degree in Sports Nutrition and Exercise Science.  He also holds an Associate of Science degree from Luzerne County Community College in Nanticoke, PA.

Ryan’s first position was as a clinical dietitian at the Tioga Nursing Center in New York.  His second temporary clinical dietitian position was at Sodexho, the Manor Care Kingston East unit in Kingston, PA.  These two positions were coverage for dietitians on maternity leave.  The journey for a full-time position as a dietitian came to an end, as Ryan held his first permanent position as a clinical dietitian at Allied Skilled Nursing Facility in Scranton, PA for a year and a half.  In December 2006, Ryan accepted a full-time position as a registered dietitian with Nestle Nutrition covering the healthcare brands and Gerber infant products.  On July 1, 2016, Ryan left his job with Nestle Nutrition and is now working exclusively as founder and CEO of Visual Veggies Software.

Ryan has shared an interest in computers, and in January 2002, he had been introduced to computer software programming.  During the summer months following his internship, Ryan knew he needed to study for the Registration Exam for Dietitians, thus, he began writing his first program, the RD Practice Exam.  After 3 months, the demo for the RD Practice Exam was launched!  As friends and family were testing the application, Ryan was busy completing the final product.  The full version was completed shortly after in December.

Ryan’s passion is on making studying fun and informative when it comes to the Registration Exams for Dietitians and Dietetic Technicians.  The study guide software his company offers provides students with the information they need to know for the exams in a fun, interactive way.  Ryan always listens to the feedback and suggestions made by students using the software and has included many student suggestions into the programs, making it exactly what they want.

Do you have a question about Visual Veggies?

ABOUT VISUAL VEGGIES
Go to Top